HOME > ABOUT US > MARS ROVER PROTOTYPES

Precision Prototyping for the Aerospace Industry

Like those in any industry, aerospace manufacturing projects often run on tight budgets and strict schedules. Additionally, the nature of the industry leaves no room for error in the final product, and parts and materials must meet exacting standards.

Prototyping plays an important role in meeting these requirements, allowing engineers to test their component designs for fit, form, and function prior to full production. To get the best results from the prototyping process, you need to be sure you’re working with the best prototype manufacturers. For that, look no further than Prototype & Short-Run Services, Inc. 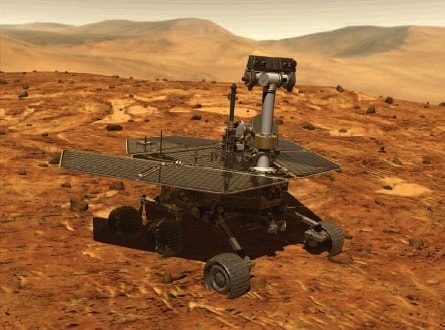 In the early 2000s, Prototype & Short-Run Services, Inc. was privileged to be a part of something bigger than ourselves. Our technical innovation and extreme precision fabrication capabilities were called upon by Boeing to provide parts and components for nothing less than NASA’s Opportunity Mars rover. On July 27, 2014, after an almost unbelievable ten years traversing the surface of Mars, Opportunity broke the off-Earth driving distance record that had been established by Russia’s Lunokhod 2 Moon rover in 1973.

Originally sent to the Red Planet in January 2004 on a four-month exploratory mission, Opportunity continues to astound engineers and scientists, sending back valuable information with no end to its exploration in sight.

We at Prototype & Short-Run Services, Inc. are honored to be a part of the Opportunity team and what is perhaps mankind’s ultimate engineering challenge: the exploration of space.

Our precision aerospace prototyping capabilities will help you complete your project on time and on budget. Fast turnaround times allow multiple design iterations to be turned into physical products quickly, giving your engineers the freedom to adjust and readjust their blueprints until every feature is perfect. Highly efficient production processes reduce overall costs and material waste.

Our prototyping and fabrication services are scalable to your needs. We can produce single prototype parts quickly and cost-effectively. When you’ve locked in your designs and are ready for full-scale production, we can produce your parts in any quantity you need, with superior precision and repeatability from the first part to the last.

Prototype & Short-Run Services met NASA’s stringent requirements and helped them reach an alien planet. Contact us today to find out what we can do for you.